Lewis Achenbach interprets the music and atmosphere of an event in his artwork in the moment.

“It started with documenting live music through an imaginative process, but it has become much more. It now feels like a translation or an amalgam of two languages. A Jazz Occurrence is a meeting place; a tertulia of like minds. We have a dialogue about our future by using the tools of our past. This is an artistic movement. The artists from opposite banks are meeting in the rush of mid-river.” — Lewis Achenbach, founder Jazz Occurrence (lewisachenbach.com | facebook.com/jazzoccurrence)

When Blue Daring recorded their own music track back in 2017, a four-minute jazz-like instrumental titled “Symphonic Funk,” it was a way of creatively expressing our own work process. So how could our act of creativity inspire others to do the same?

That was the question that led Shuky Leung, a designer, and Courtney Griffin, a writer and strategist, to produce The Creative Experience, a music video and the third and final Creative Challenge.

Both united by a passion for music, Shuky and Courtney wanted to find a way to challenge others to think creatively, using the BD song.

“We both see music as this language that can communicate beyond words, and we wanted to use that to inspire those who are already thinking creatively.”

The two recruited three artists to represent different and diverse art forms. The artists featured in the video are BOJITT, a body painter (using performer Curtis Bannister as her subject), Lewis Achenbach, a painter, and Hannah Santistevan, a dancer.

“We told each artist that they would have roughly four minutes to create, but that was their only limitation,” said Shuky. “We purposely gave them little to no direction, because we wanted to see what they came up with in the moment.”

Over a day-long shoot in April, Courtney, Shuky and crew from the production company Polymyth gathered with the three artists to capture their creative expression on film. The shoot featured multiple cameras, a drone and a fully-improvised performance from each artist.

“The video opens with the words ‘creativity strikes at a moment’s notice,’ and that’s a notion that inspired this entire concept,” said Courtney. “What we’re witnessing from each of these artists is pure, unfiltered creativity.” 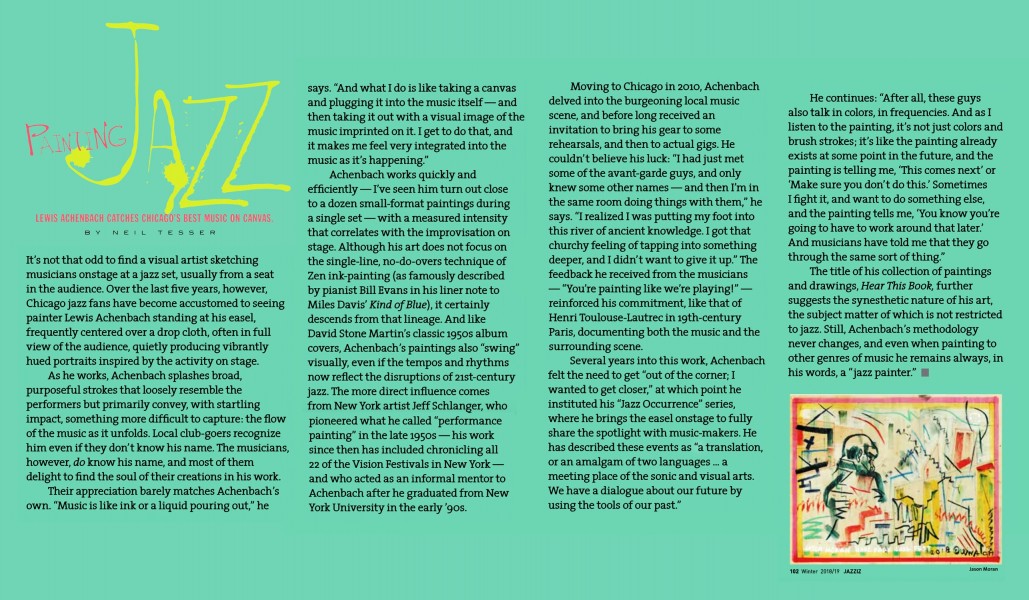 It’s not that odd to find a visual artist sketching musicians onstage at a jazz set, usually from a seat in the audience. Over the last five years, however, Chicago jazz fans have become accustomed to seeing painter Lewis Achenbach standing at his easel, frequently centered over a drop cloth, often in full view of the audience, quietly producing vibrantly hued portraits inspired by the activity on stage.

As he works, Achenbach splashes broad, purposeful strokes that loosely resemble the performers but primarily convey, with startling impact, something more difficult to capture: the flow of the music as it unfolds. Local club-goers recognize him even if they don't know his name. The musicians, however, do know his name, and most of them delight to find the soul of their creations in his work.

Their appreciation barely matches Achenbach’s own. “Music is like ink or a liquid pouring out,” he says. “And what I do is like taking a canvas and plugging it into the music itself — and then taking it out with a visual image of the music imprinted on it. I get to do that, and it makes me feel very integrated into the music as it's happening.”

Achenbach works quickly and efficiently — I’ve seen him turn out close to a dozen small-format paintings during a single set — with a measured intensity that correlates with the improvisation on stage. Although his art does not focus on the single-line, no-do-overs technique of Zen ink-painting (as famously described by pianist Bill Evans in his liner note to Miles Davis’ Kind of Blue), it certainly descends from that lineage. And like David Stone Martin’s classic 1950s album covers, Achenbach’s paintings also “swing” visually, even if the tempos and rhythms now reflect the disruptions of 21st-century jazz. The more direct influence comes from New York artist Jeff Schlanger, who pioneered what he called “performance painting” in the late 1950s — his work since then has included chronicling all 22 of the Vision Festivals in New York — and who acted as an informal mentor to Achenbach after he graduated from New York University in the early ’90s.

Moving to Chicago in 2010, Achenbach delved into the burgeoning local music scene, and before long received an invitation to bring his gear to some rehearsals, and then to actual gigs. He couldn’t believe his luck: “I had just met some of the avant-garde guys, and only knew some other names — and then I’m in the same room doing things with them,” he says. “I realized I was putting my foot into this river of ancient knowledge. I got that churchy feeling of tapping into something deeper, and I didn’t want to give it up.” The feedback he received from the musicians — “You’re painting like we’re playing!” — reinforced his commitment, like that of Henri Toulouse-Lautrec in 19th-century Paris, documenting both the music and the surrounding scene.

Several years into this work, Achenbach felt the need to get “out of the corner; I wanted to get closer,” at which point he instituted his “Jazz Occurrence” series, where he brings the easel onstage to fully share the spotlight with music-makers. He has described these events as “a translation, or an amalgam of two languages… a meeting place of the sonic and visual arts. We have a dialogue about our future by using the tools of our past.”

He continues: “After all, these guys also talk in colors, in frequencies. And as I listen to the painting, it’s not just colors and brush strokes; it’s like the painting already exists at some point in the future, and the painting is telling me, ‘This comes next’ or ‘Make sure you don’t do this.’ Sometimes I fight it, and want to do something else, and the painting tells me,‘You know you’re going to have to work around that later.’ And musicians have told me that they go through the same sort of thing.”

The title of his collection of paintmgs and drawings, Hear This Book, further suggests the synesthetic nature of his art, the subject matter of which is not restricted to jazz. Still, Achenbach’s methodology never changes, and even when painting to other genres of music he remains always, in his words, a “jazz painter.”

That's a great article. Thanks for shaing it. Happy New Year!
Posted By: carl
Fans Only 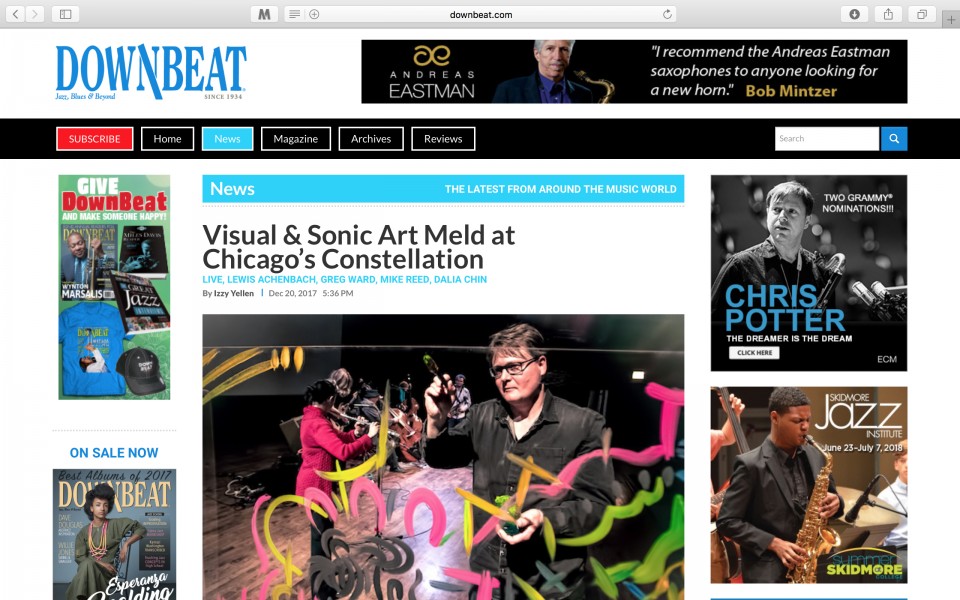 The project has arrived.

JO in Downbeat... Congratulations, Lewis! They did a very nice write up.
Posted By: carl
Fans Only 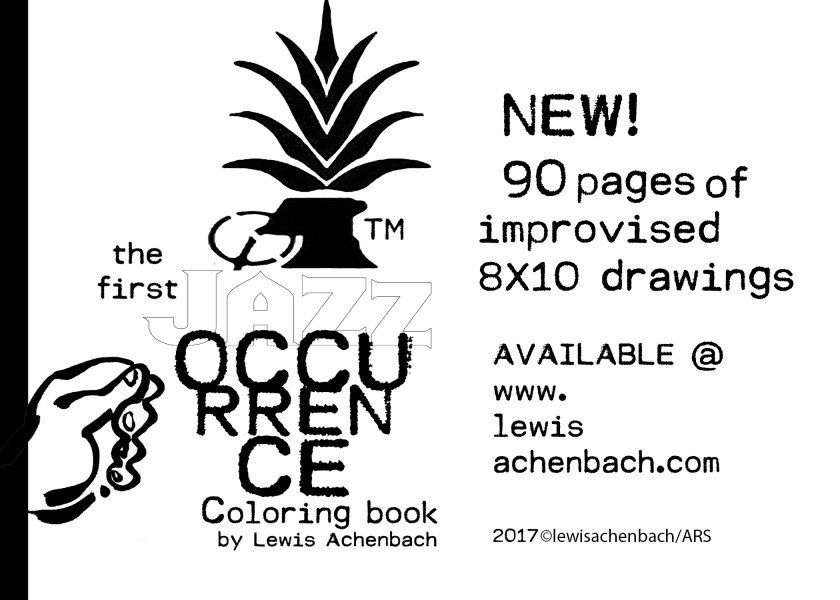 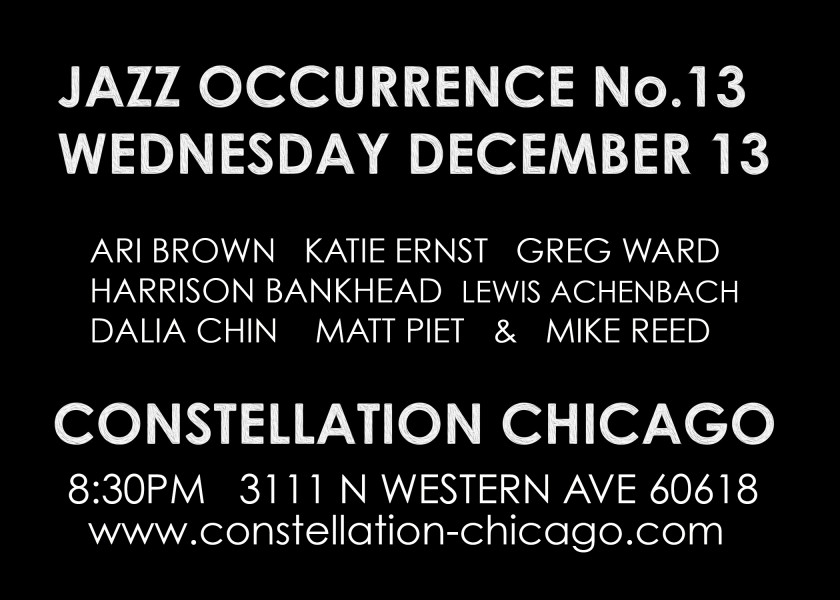 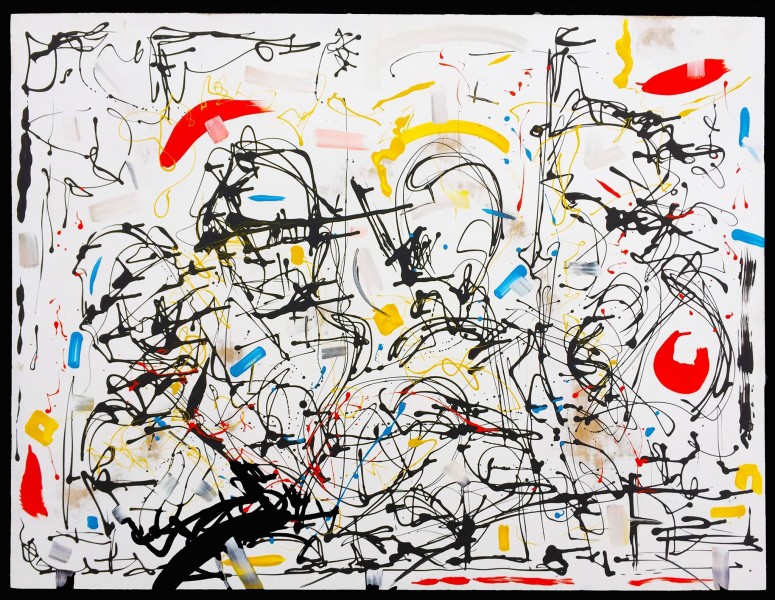 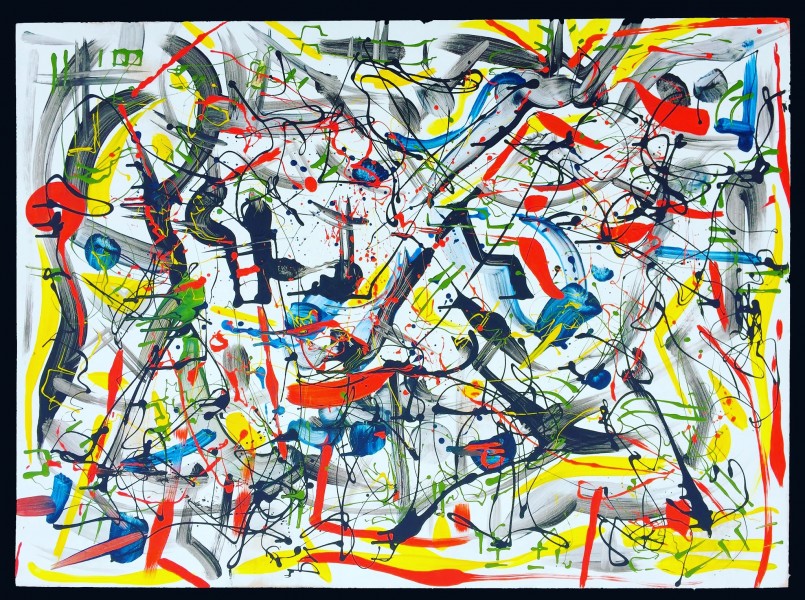 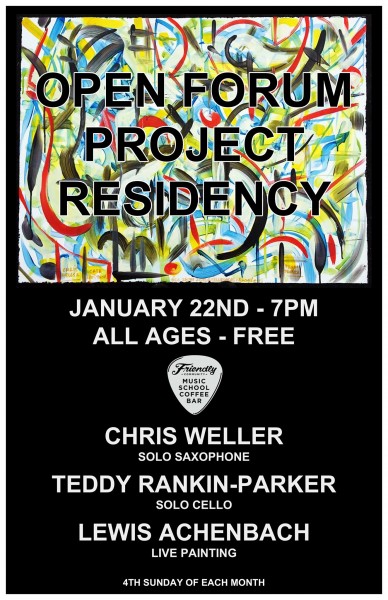 Chris Weller and Lewis Achenbach collaborate on the 4th Sunday of evry month for a while. 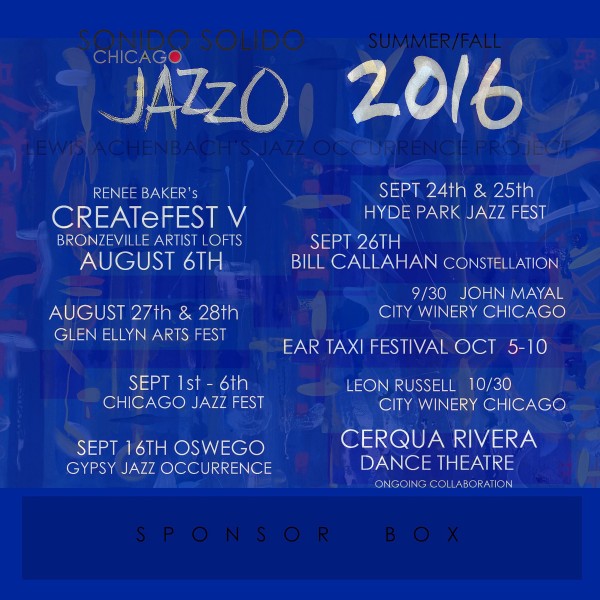 A pleasantly busy schedule is ahead. Hot Chicago summer festivals and air conditioned inside concerts too.

Renee Baker's CREATeFEST is going to be fun. CJF and HPJF are always great. I'm sketching Bill Callahan, Leon Russell, and John Mayal. And collaborating with Samuel Williams in Oswego for a Gypsy Jazz Occurrence.

Then there's Glen Ellyn Arts Fest with Airic ThaPanimal on steel drums, to name one. And in the works: another Chris Weller collab. Not to mention the David Weathersby documentary JAZZ OCCURRENCE is in it's gathering interviews stage. We had JazzO No.9 and 10 recently for the 3rd annual Jazz Occurrence Art Exhibition in Aurora. Much attendance. Many thanks. 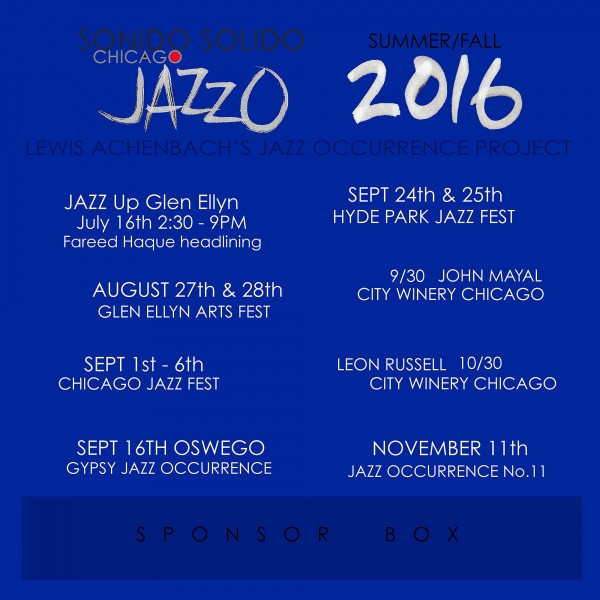 March, April and May Jazz Occurrences 2016

March, April and May Jazz Occurrences 2016

Positano Postcard delivered to the next 5 subscribers! 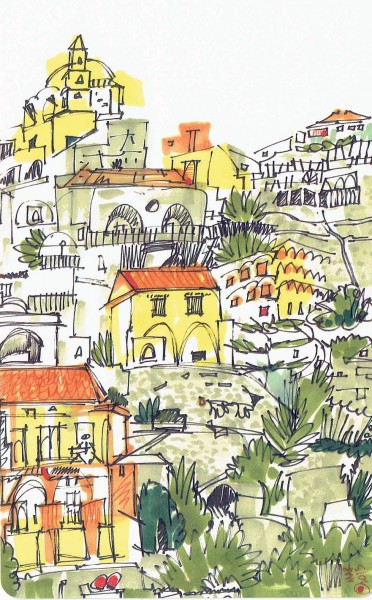 Jazz Occurrence™project page at any level.

This is one of my sketches of the dwellings Amalfi coast mountains by the ocean.

And again, if you subsribe at $50 or $100 you get 11X14 copies of sketches every month. Fresh art from Chicago and the Jazz Occurrence™ project.

Art incentives to support the JazzO™project 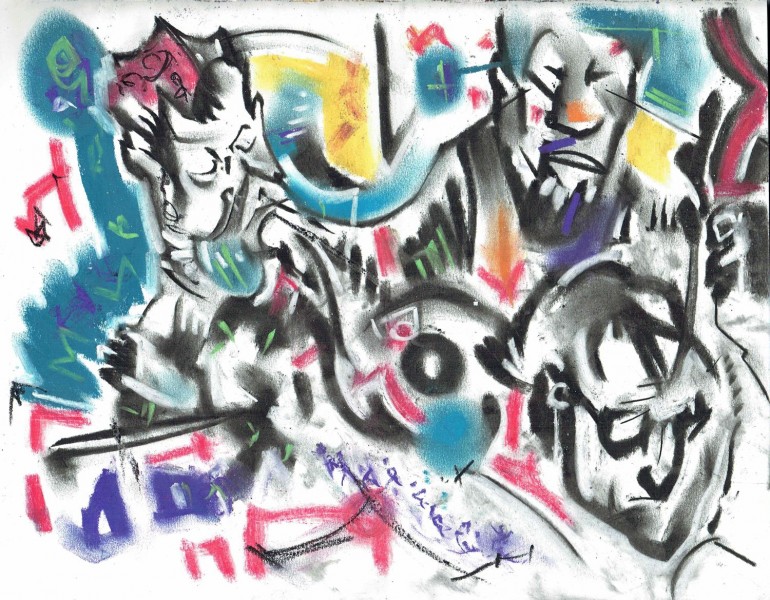 Friends and neighbors, curds and whey, partons and patronesses, I have an incentive for you.

These will be the begining of the ACHENBOX; a patron only subcription to the fresh artworks of the Jazz Occurrence™project.

Don't delay. Get on the bus. I thank you, and the project survives because of you.

Live painting performances NEXT UP:

May 6th at the APAC w the Chicago Modern Orchestra Project

June 3rd at the APAC w the John Pazdan Band 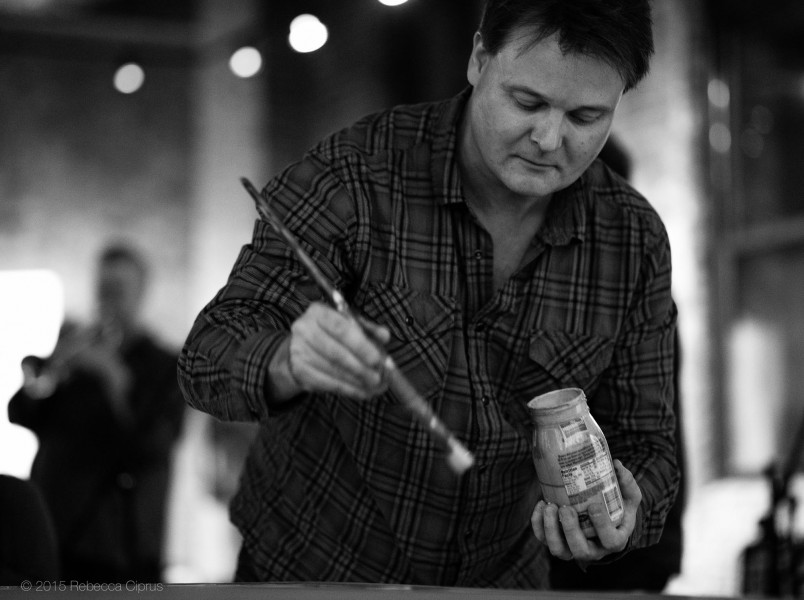 photo by Rebecca Ciprus at Jazz Occurrence™ No.8 at Fulton Street Collective 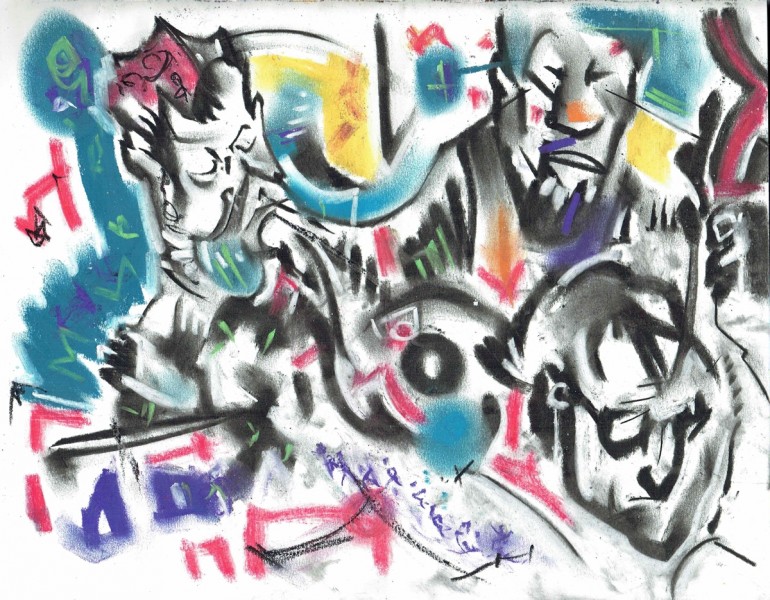 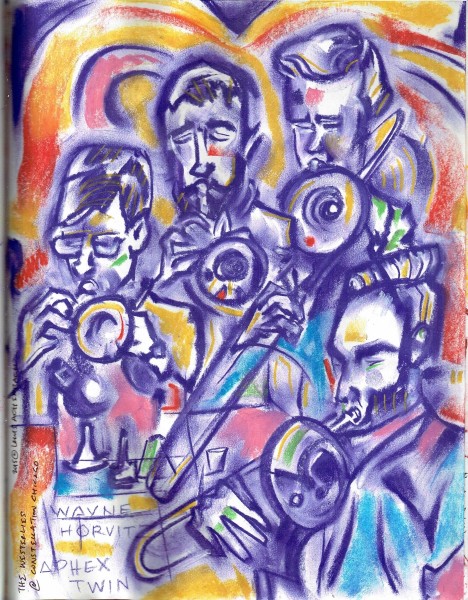 2014©lewisachenbach/ARS the Westerlies at Constellation Chicago

Saxophonist Chris Weller turned me onto ScratchBang. So here we go.

Funding these Jazz Occurrences takes time and money. And it’s very much worth it.

So far, this has been working.

Chicago’s musicians have been performing for an art-trade. They do a Jazz Occurrence™ and get paid in art.

“Lew has spent the last few years documenting Chicago’s jazz and avant-garde music in his unique, spontaneous, explosive painting style. He truly captures the essence and magic of improvised music, because he himself improvises in real-time with the musicians. He has spent the time to cultivate his voice and place in the music in the same way musicians do— by showing up and sitting in, studying the music and the players, week after week, for years. He understands our mission not just in words and sounds, but also in feelings, shapes and colors.” — Preyas Roy 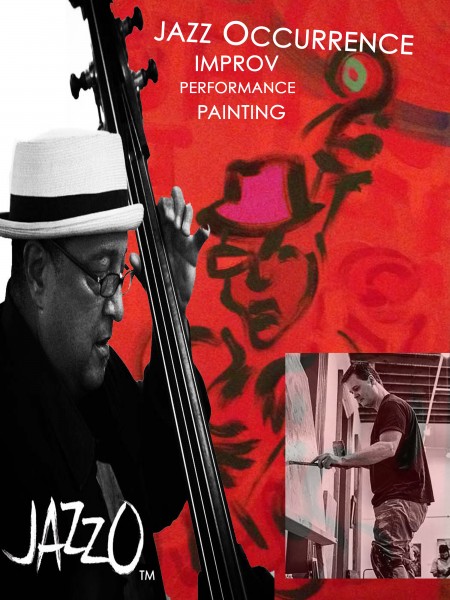 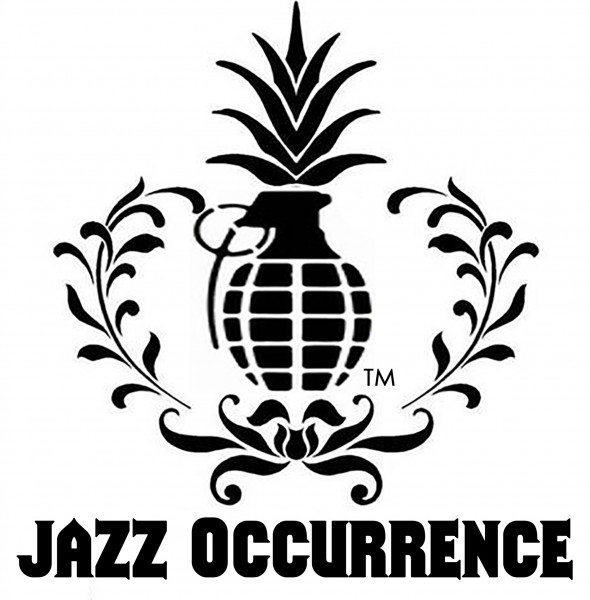